I used to do a lot of batch cooking back in the days when I had three children at home, had to work full time, and had to cook for and take care of my parents as well. I would often do a cook and freeze day once a month to have lots of meals set and ready to go all month long.

I thought I'd put this out here because batch cooking is not only great for busy families, but for anyone! Seriously, the fewer you cook for the more variety of meals you can make. Batch cooking can really be great for people who just don't enjoy cooking too. It saves so much time and effort - less shopping, planning, food prep, clean up, and cooking time!

Let's start with slow cookers, I don't have an Instant Pot but I don't see why it couldn't be used in place of the slow cooker, and let's talk beef for today. (I feel a series of posts coming on lol)

Most slow cooker recipes for beef use a cut like chuck roast. My choice is London broil. It might cost a little more per pound but there is almost zero waste on London broil, where chuck roast is usually a ton of fat and gristle that has to be discarded after cooking. I think the London broil comes out cheaper in the end and a lot it's less work when it comes to the shredding too.

I cut a London broil into large cubes, add a cup of beef broth, and season with my go to Montreal Steak seasoning. I don't bother with searing, but you can if you prefer. Cook on low for 8 hours. (If cooking for a family, 2-3 London broils could easily fit in the slow cooker to be cooked at the same time). One makes plenty of meals for us since I'm only cooking for two, and I don't like to leave it sitting around in the freezer for too long. 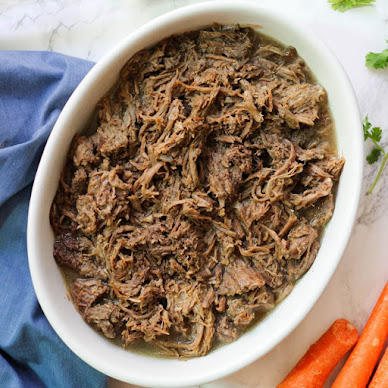 Photo from Pinterest
Once cooked, shred with two forks, and put back in the slow cooker for about 15 minutes to absorb some of the juices. Next, remove from slow cooker and divide into meal portions depending on how many you are serving for each meal.
Keep out what you want to use right away and freeze the rest of the portions for some quick and easy meals. Let cool first and then store flat in freezer bags to save freezer space, be sure to label them too.
The first night I usually serve it over egg noodles with a quick steamed green veggie on the side - thicken sauce for gravy (optional) or make French dip sandwiches. Both are basically using it as is. You could use all portions just for these two easy meals or add some extras to make totally different meals.
Here are a few ways I have used the portions from the freezer in the past...
Korean Beef (In place of ground beef for lettuce wraps, over rice or rice noodles)
Beef Gyros
BBQ beef sandwiches (Just add BBQ sauce and buns)
Italian Beef Subs
Spicy Korean Beef Soup
Beef, egg, and cheese breakfast tacos
Steak and veggie quiche (great way to use up leftover veggies too)
Beef Stroganoff
Shredded Beef Tacos (Add a teaspoon of salsa per serving and fry until meat is hot and starts to crisp. Your choice of toppings. I like mine on the authentic side with crumbled Caso Freso, diced onion, jalapeno and cilantro)
Beef Enchiladas
All super easy and dinner will be done in a flash!